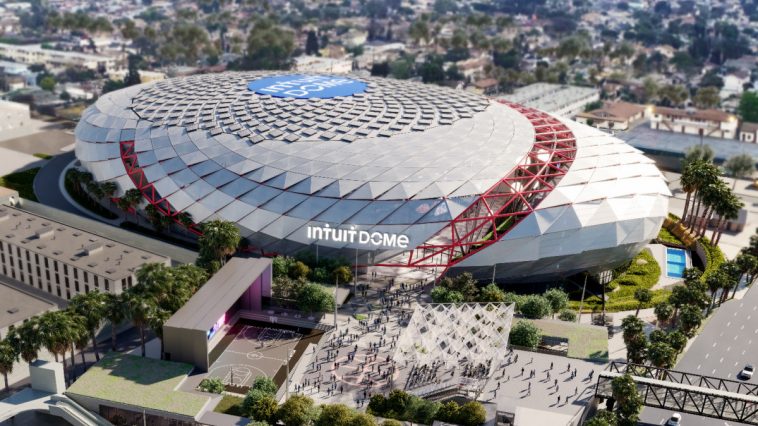 The LA Clippers and their owner, Steve Ballmer, are done sharing Staples Center with the LA Lakers. Earlier this week, the team announced that they had their groundbreaking event in Inglewood, California. A site South of the brand-new SoFi Stadium will be the location for the new arena, the Intuit Dome.

The 18,000 seat arena will feature some impressive accommodations and amenities for fans when complete for the 2024-2025 NBA Season. According to media information posted online, the upper bowl will be 45′ closer to the action, seats will offer more leg room, and they will have nearly twice the number of restrooms most arenas have. Like most newer arenas and stadiums, the Intuit Dome will have a large video scoreboard above the court.

• 18,000 – Seats
• 5 – Full-sized basketball courts
• 350,000 – Hours spent designing Intuit Dome
• 640 – Restrooms, twice as many as in any other arena
• >1,500 – Touchless restroom fixtures
• 0 – Concession stand lines
• 20” – The width of every single seat
• 35” – The depth of every single row of seats
• 45’ – How much closer to the action an upper-bowl seat holder will be than at other
arenas
• 199 – Game clocks, each a reminder to get back in your seat
• $100M – Amount dedicated to Inglewood causes and infrastructure, the largest
community benefits package ever associated with an arena
• $260M – Amount of estimated annual economic activity generated in Inglewood
• 7,000 – Jobs created during construction
• 30% – Percentage of minority and disadvantaged business enterprises that Intuit Dome
will employ
• 30% – Percentage of permanent jobs at Intuit Dome that will go to Inglewood residents
• $1M – Amount Intuit will give to L.A. schools over the next three years
• 0 – Amount of waste Intuit Dome will generate once operational
• >300 – Electric vehicle charging stations on site
• 15% – Reduction in vehicle trips to Intuit Dome with new transportation management
program
• 26 – Fuel-friendly tugboats purchased for Port of Los Angeles to reduce emissions
• 7.5M – Gallons of water Intuit Dome will save annually
• 12 – New zero-emission vehicles awarded to the City of Inglewood
• 1,020 – Electric vehicle charging units installed in Inglewood homes and public parking
lots

Information published in their media PDF.

The move is probably good for the Clippers as they have always been the second best Los Angeles pro basketball team. Maybe they can build their brand moving to Inglewood.

Intuit Dome, the new home of the LA Clippers, will open for the 2024-25 season in Inglewood, California. Built for the fan, by the fan, the technologically advanced and basketball-obsessed arena, entertainment venue and outdoor plaza will deliver a uniquely intimate and intense experience. Intuit Dome makes no sacrifices in bringing fans close to the action, creating the most raucous AND comfortable AND efficient gameday experience possible.

The one thing I struggle to wrap my head around is how they will handle traffic on gamedays, particularly on Sundays when both the Clippers and Rams/Chargers play at home. As someone that recently attended a game at SoFi Stadium to watch my Bears lose to the Rams, the traffic situation wasn’t ideal. Not only was parking sold-out in most lots at the stadium, the traffic throughout Inglewood on gameday wasn’t exactly quick for fans that wanted a quick exit post-game.

Clippers fans will likely enjoy this shiny new arena when it opens and I look forward to visiting when my Lakers play. 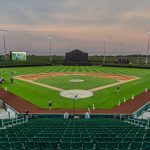 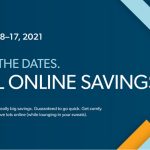